Talking About Climate Change in the Wake of Disaster 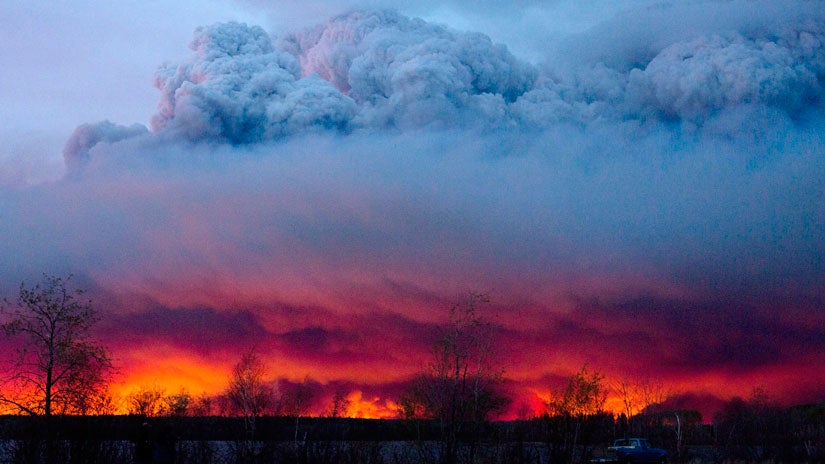 Canada is on fire. Fort McMurray is not the only place, but certainly the highest profile. The Manitoba-Ontario border is also burning, and there are hundreds of smaller fires across the country. My heart goes out to those who have been displaced by this; I can only imagine how difficult it must be, and I’m so glad that so far nobody has been killed (that I know of). For those who have lost everything, or who are living in a state of suspense and uncertainty, hang in there; help is coming from across the country, and while it can’t replace everything you’ve lost, I hope it will help you get through the day to day until you’re in a place where you can find a path forward. Right now your safety and basic needs are your highest priority, and deeper conversations can wait.

For the rest of us, we’ve already waited too long to have frank discussions about the way that anthropogenic climate change contributes to disasters like this. Drought and temperature fluctuations and wildfires are all natural, but these are unlike anything we’ve seen – except in the climate change literature, which suggests that we should have been expecting this sort of thing. Why didn’t we?

We’ve moved beyond the debates of the last decade, about whether or not climate change is even real or whether or not humanity has contributed to it through burning fossil fuels. Sadly, once that debate died down it appears that our attention on that issue died down too. Despite the big deal of the Paris climate conference, climate change was almost entirely absent from the 2015 federal election campaign; without controversy, it apparently isn’t worth talking about. Rather than agreeing that it’s real and doing nothing about it, we should have seen party leaders comparing plans to address it, including plans for disaster relief. We did not, and now governments are scrambling.

Now the issue is thrust back under our noses, but talking about climate change during this time of crisis is deemed insensitive. When Elizabeth May brought it up in Parliament – the one place in the country that should absolutely be taking a systematic approach to the issue rather than merely offering platitudes and prayers for those affected – she was attacked for her insensitivity and lack of tact. CBC’s The 180 asked “How soon is too soon to talk about climate change?” The only way that talking about climate change in the middle of a disaster that clearly has climate as a contributing factor can be construed as insensitive, I would argue, is if we see it as a blame game – that is, Canada has a nasty energy politics that pits Alberta against the rest of the country, and it has distorted our ability to have necessary conversations.

Imagine if a fire in a garment factory that killed hundreds of sweatshop labourers didn’t come with a discussion about workers’ rights. Or if the explosion of a chemical factory in Bhopal that resulted in severe poisoning of the local population for generations didn’t make anyone ask questions about the safety of those chemicals. Or if we didn’t talk about the safety of deepwater drilling during the BP oil spill. Or if we didn’t talk about climate change in the aftermath of a tsunami or hurricane. That would seem crazy, wouldn’t it?

There are some key misunderstandings or perceptions that drive this crazy situation.

First, the idea that oil extraction – and those who make a living from it – in Alberta is somehow more responsible for climate change than the rest of us driving our cars and heating our homes. Yes, they have higher emissions than us because of the energy it takes to extract the oil, but we’re the ones buying it. We are all complicit in climate change, and we will all face its consequences at some point. Some people have expressed a sense of irony or even satisfaction at the idea that climate-change fuelled forest fires might wipe out Canada’s oil industry; that’s grossly inappropriate, and it fuels the false conflict between Alberta and the rest of the country because it makes Albertans defensive.

Second, the idea that Albertans have to defend themselves from the rest of the country. They do not: Canada stands together. This false conflict is fuelled from both sides, and it needs to stop. But what some Albertans have wrong is that they feel that defending themselves and defending their employment is the same thing. It is not. It is possible for all of us to be critical of an oil economy, even if we work within it and profit from it. Albertans may profit from it directly, but we all profit from it indirectly, even as we are the ones burning oil. We who are critical of the oil economy do not stand outside of it to throw stones; rather, we are trying to work within our system to make it more sustainable. We are not anti-jobs, we are working to promote solutions that offer more jobs and less environmental impact. We do not want you to lose your jobs, we want you to have long-term jobs that don’t depend on the global oil price set by other oil producing nations.

Third, the idea that the current wildfires are a single and personal disaster afflicting Alberta. They are not. Instead, they are another symptom of climate change, one part of an ongoing disaster. When we say that it is insensitive to talk about climate change as the cause of the fires because there are still people displaced by them, we neglect the fact that there are people displaced by climate-change fuelled disasters around the world. This is not at all an isolated incident. People around the world suffering from floods and droughts and hurricanes that are escalating in severity and frequency are not afraid to say that this is climate change in action, so why are we holding this particular instance apart? By doing so, we are being insensitive to all who suffer from climate change – that we are somehow separate from the world, and that we do not suffer with them. There is incredible strength in solidarity, and we’re missing out on it by keeping ourselves out of that conversation.

So while the people of Fort McMurray can focus on making sure their day-to-day needs are met, knowing that they have the support of their country, the rest of us should absolutely be having the conversation about climate change. Aside from how we can directly help the victims of current wildfires, we should be talking about how to prevent the next ones – which means taking a hard look at our own consumption, economy, and policies. A lot of Albertans will be starting over after this; let’s start over with them.

Skip back to main navigation

Disclaimer: This isn’t a criticism of the no name brand, Loblaws, or Superstore. It is an observation on our consumption habits. I have to admit I watch for these Naturally Imperfect grocery items when shopping at the various stores that…
END_OF_DOCUMENT_TOKEN_TO_BE_REPLACED

Dignity the state or quality of being worthy of honour or respect.a high rank or position. a composed or serious manner or style. a sense of pride in oneself; self-respect. Oxford Languages Manitoba’s premier, Heather Stefanson, announced a one-time “Carbon…
END_OF_DOCUMENT_TOKEN_TO_BE_REPLACED

Eat on a Local Budget – Make Your Own Bread

Does baking your own bread truly allow you to eat local on a budget? The answer is a resounding “yes!” When comparing quality with quality – that is, buying a good quality loaf with baking one – you will spend…
END_OF_DOCUMENT_TOKEN_TO_BE_REPLACED

Let’s Look at the Carbon Tax

“Tax” is such a bad word in the political scene (more on that in another post) and the Carbon Tax certainly has a reputation for a cash grab by the Federal Government. Unfortunately, many people don’t fully understand what the…
END_OF_DOCUMENT_TOKEN_TO_BE_REPLACED